This piece originally appeared in the Winter 2011-2012 issue of The Coralville Connection by the city staff. 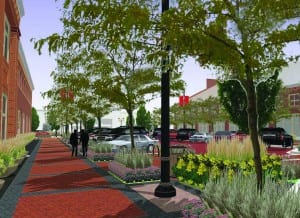 The late September announcement that Von Maur will anchor Coralville’s Iowa River Landing (IRL) follows years of planning for the transformation of this former industrial park. Recent project announcements in this highly visible area bordered by the Iowa River, Interstate 80, and First Avenue – including Von Maur’s 80,000 square-foot department store, a hotel, brewery, and the University of Iowa Health Care’s Iowa River Landing facility – will bring a positive change to the landscape on the east edge of Coralville.

Planting Seeds of Change
Seeds of change for this area were planted in the mid-1980s when the Community Planning and Vision committee considered the impression Coralville made upon drivers viewing this blighted area along Interstate 80, and they began to look at ways the community could be differentiated from others along this major roadway. At that time, the Industrial Park offered a view of unplanned development, perceived environmental contamination, a truck stop, million-gallon petroleum tank, and the exteriors of an adult dance and entertainment establishment, auto body repair shop, salvage yard, adult bookstore, and waste hauling business.

See a special photo gallery of the area ‘Before the Landing’ >

By 1988, the City Council had identified the Industrial Park as a priority for economic redevelopment, envisioning a new gateway to the community, a hotel and conference center to meet the needs of the University and area businesses, and a riverfront recreation and entertainment district. This vision embraced the highest and best use for the property along the Iowa River and high-traffic-volume Interstate.

The challenge for private reinvestment in this brownfield area was perceived and actual environmental contamination caused by the existing and previous land uses, as well as the multitude of parcels and land owners—over 110 parcels and 74 owners – which made private redevelopment difficult at best.

The resulting clean-up has included

The transition from Industrial Park to Iowa River Landing has included recycling and reuse of former buildings, including

Eco-friendly elements in the Iowa River Landing will include

Recent work in the Iowa River Landing has also included infrastructure improvements and wetlands park improvements. The park improvements include a trail, comfort station, and elevated walkways that ring the pond and traverse the wetlands on the east side of the Marriott Hotel and Conference center. A limestone outcropping with cascading waterfall feature at the north end of the pond is also a part of the project.

Construction continues throughout the next year, with the following new openings in 2012: